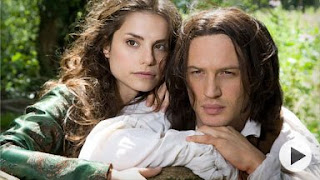 I watched Wuthering Heights last night -- well, the first part of it; the DVR cut out and didn't remember to record the second half. I really enjoyed it! I haven't liked the others (and once my dancer friend and I did a marathon of several different classic versions, so I've seen a bunch), but this one was good. Cathy both attracts and irritates, which is how she ought to be. Charlotte Riley's accent is fabulous, as well. Heathcliff's sullenness, brief period of moderate happiness, and eventual madness and destruction is well done.
I see I can watch the rest at the site, so will do that soon!
Posted by DangAndBlast! at 8:40 AM No comments: Links to this post

I have to create things. Even when telling myself I needed to stay focused at work, I created curtains and crowns out of discarded items. But I'd love the things I create to be objectively productive, not just turning junk nobody wants into more junk nobody wants. Some people have ideas:

Sheri Schmelzer had an idea. She made bugs and flowers and junk to stick in the holes of ugly plastic shoes to make them, if not less ugly, at least more decorative. It became popular, became Jibbitz, and now she's a millionaire. (Full disclosure: I wear Crocs at work, because I'm on my feet all day and walk a mile to and from my car. I have no jibbitz, and wear this kind of Croc, but still. Shame takes second place to waterproof comfort.)

I have ideas, but I doubt they're things that would appeal to the masses. My sister understands the masses (she's a school counsellor, down with Hannah Montana and all that), but doesn't make things. New plan: to get together, her ideas and my making things, and become millionaires.

Hey, a girl can dream, right?

(Now back to the knitted socks.)
Posted by DangAndBlast! at 10:55 PM 5 comments: Links to this post

Just watched Helvetica. Entertaining to see all the perspectives, from people loving it because they don't think typefaces should say anything, to people hating it because it doesn't say anything, to an ... interesting ... woman who connects it to militarism and admittedly without any evidence except her own animosity towards both typeface and ideology correlates its usage with voting for Reagan. I think I come down mostly on the side of the fellow who says it's fine, useful for things where readability is the goal (like road signs), but basically boring.

And I got to teach Himself about the difference between serif and sans serif ... twice ... and I don't think he paid attention the second time either. But he is very good to me and does pretend to be interested in the things that interest me (at the time, at least), and is entertained that I'm interested, so I can't complain.

Why didn't I read much in October? We were sleeping on a matress in the living room, post Ike, with no lamps, and I had to be even quieter than normal, and what spare daytime hours I had were spent laying a new laminate floor in our water-damaged bedroom. So, only got away with a few novels for teenage girls and one dear little story for small children. Oh, well!
Posted by DangAndBlast! at 9:00 PM No comments: Links to this post

Between taking care of the husband, doing a bit of yardwork and housework, satisfying the we-never-see-you of the various family bits, and my job, I've managed to get a bit of reading in since my birthday (July 28):

July 28-:
Raisins and Almonds. Kerry Greenwood.
The Care and Feeding of Books Old and New. Margot Rosenberg and Ben Marcowitz.
Death Before Wicket. Kerry Greenwood.
A Hole in the Wall. Louisa May Alcott.
(Yes, it's a short story, but I bound it in a book all by itself, so it counts as a book!)

December:
Anne of Ingleside. L. M. Montgomery.
Mort. Terry Pratchett.
Sourcery. Terry Pratchett.
Rainbow Valley. L. M. Montgomery.
William Morris and the Arts and Crafts Home. Pamela Todd. (I love William Morris designs!)
Rilla of Ingleside. L. M. Montgomery.
The Story Girl. L. M. Montgomery.
An Apology for the Life of Mrs. Shamela Andrews. Henry Fielding.
The Mysteries of Udolpho. Ann Radcliffe. (Long, but really just as good as all the reviews at the time said it would be!)
The Golden Road. L. M. Montgomery.
Kilmeny of the Orchard. L. M. Montgomery.
Relighting the Lamp of Excellence. Michael and Lois DeBakey.
America, 1908. Jim Rasenberger. (I've learned, if I give a book to someone in the hopes they'll lend it to me, I'll usually be wrong, so I should read it first -- this was a present for my grandfather.)
Pamela, or Virtue Rewarded. Samuel Richardson. (Ok, really? Servant girl resists master's advances, so he abducts her, locks her up, and attempts rape several times, and we're supposed to find it wonderful that he finally marries her? It's a good thing that the girl succumbs to Stockholm Syndrome? For ancient novels, I'll take Ann Radcliffe over Mr. Richardson any day!)
The Shuttle. Frances Hodgson Burnett.
Masterpieces in Miniature. Agatha Christie.

A lot of the Christmas ones were actually for work -- I was doing a display on Children's Christmas books, and read those on my lunch break so that I could review them.

Can you tell what I like? Sayers and Montgomery get read every year, sometimes multiple times (I can read Gaudy Night several times in a row), and Alcott and L'Engle get worked through on a two-year rotation, normally. And I do like "cosy" mysteries.

How do I read so much? Himself has to go to sleep very early sometimes, and I like to sleep early but not at 7:30, but I can't make noise, so reading gets done then; and, due to various regulations, I'm required to have a nine-hour workday and take a one-hour lunch, which is fine when I want to go out to a restaurant or something, but is a bit lengthy when I've brought a sandwich, so I get an hour of reading in around noon most days. And I'm a fast reader. Not a reader for retention, which sometimes threw me for a loop in class (but I really did read the book! I just forgot it after I read it!), but is great for novels -- I can read an Agatha Christie a year or two later and have no idea who did it, and I get as much enjoyment out of the books I read several times a year each time I read them, because it's always fresh to me!

Read anything good lately?
Posted by DangAndBlast! at 6:34 PM No comments: Links to this post

I do mean to come back here... I have a Christmas lap quilt, and who knows what-all else ready to photograph and show off. And several comments to respond to! Thing is, my "you have a new comment!" notification comes in while I'm at work, and while I feel fine reading my email (there's professional email lists coming to that account as well), I don't feel fine blogging at work! And Himself will be out all night all this week, so I should have some time... if I don't spend it all cleaning house (as I should be doing) or goofing off and knitting socks while watching old recorded episodes of Masterpiece and the "Road to Avonlea" series (as I shouldn't really be doing all the time)...
Posted by DangAndBlast! at 6:31 PM No comments: Links to this post

Blogs in my Reader